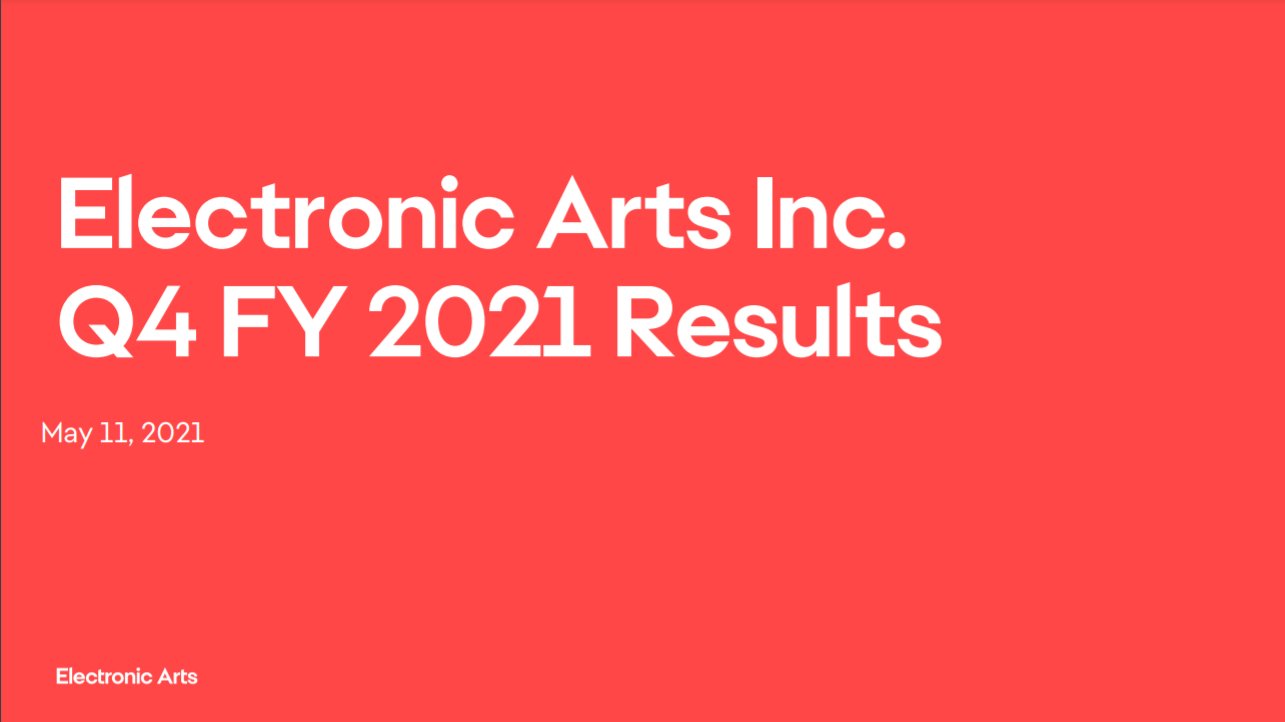 The Company is pleased to have released 13 new games in the fiscal year, including two in the fourth quarter, and to have concluded the acquisition of Codemasters, Glu Mobile and Metalhead Software, increasing its reach in sports and on mobile.

There was an impressive 42 million new players in the EA network during the fiscal year.

The Sims 4 has reached almost 36 mln players and delivered its sixth consecutive year of franchise growth. 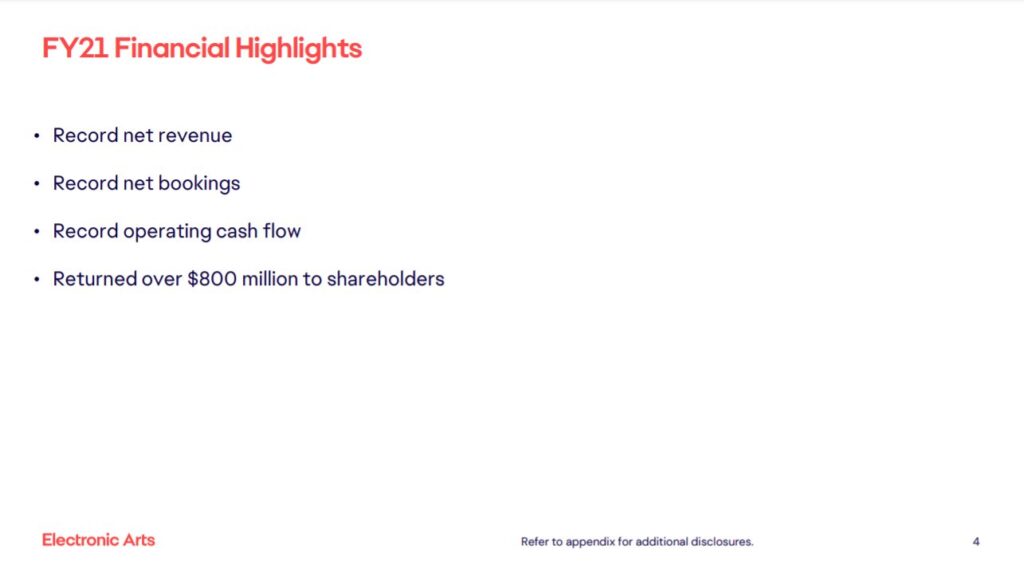 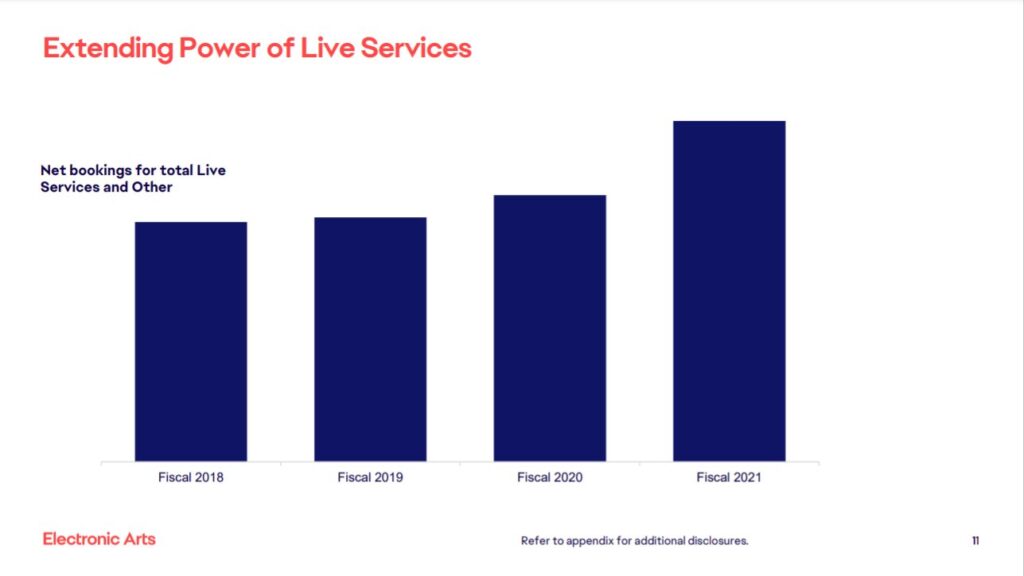 “Looking forward, the momentum in our existing live services provides a solid foundation for FY22. Combined with a new Battlefield and our recent acquisitions, we expect net bookings growth in the high teens”– COO and CFO Blake Jorgensen

Net bookings of $7.3 bln is ~18% YoY growth, which includes the impact of Glu Mobile, Codemasters and Metalhead Software.

"In sports, we expect Ultimate Team to be strong, we’re launching a new golf game, and F1. And then of course we’ll add Battlefield in the holiday season.". 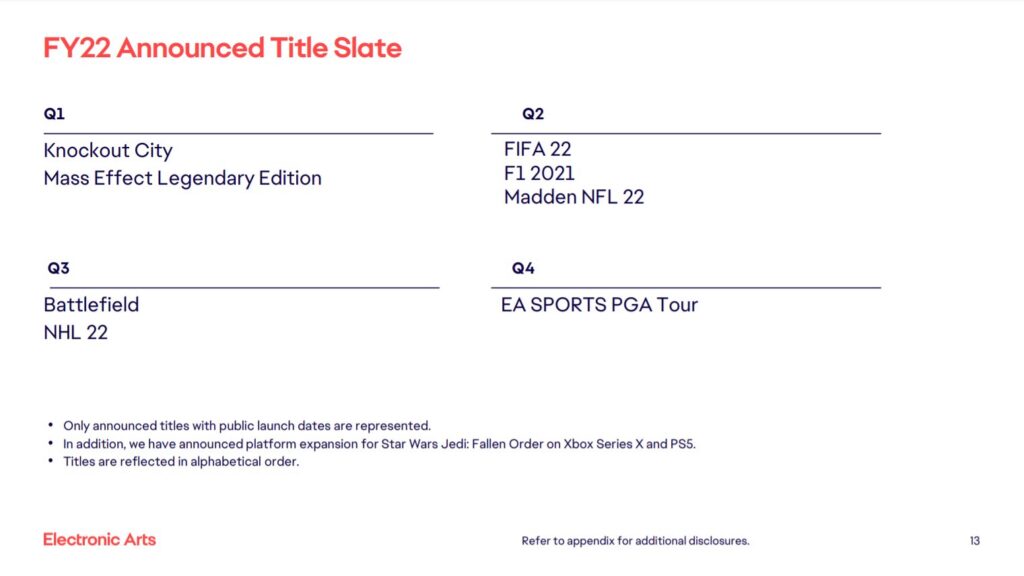 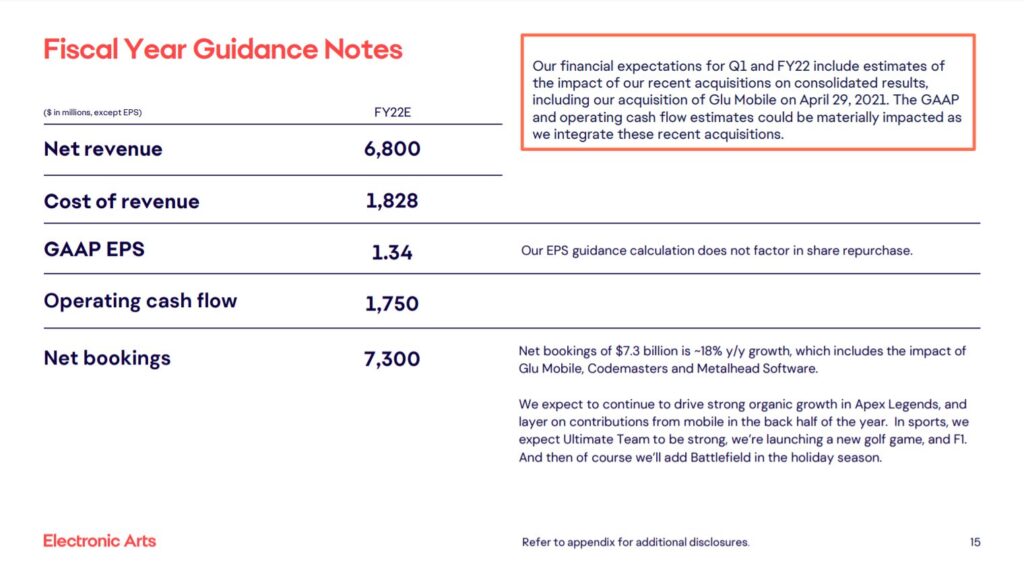 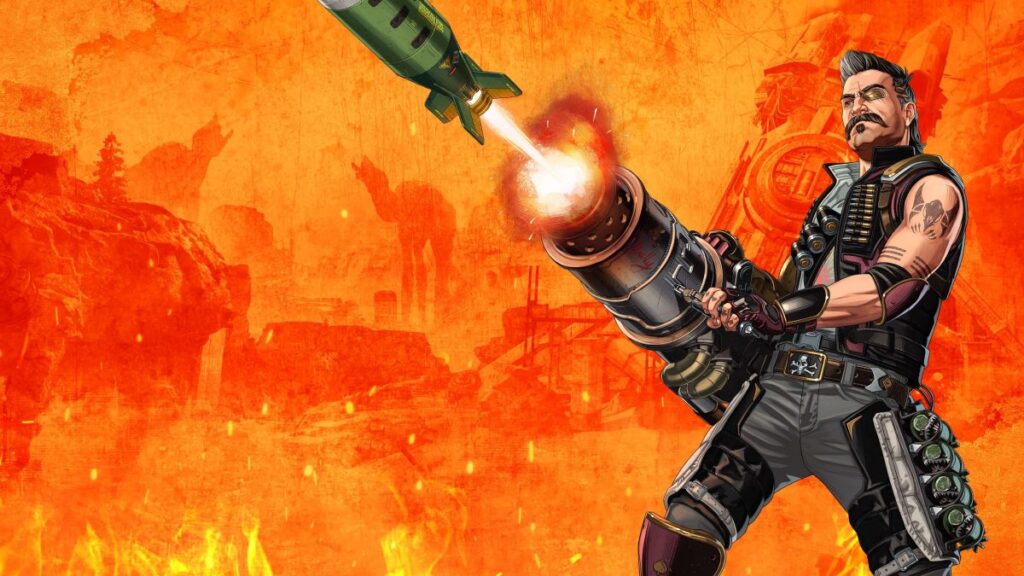 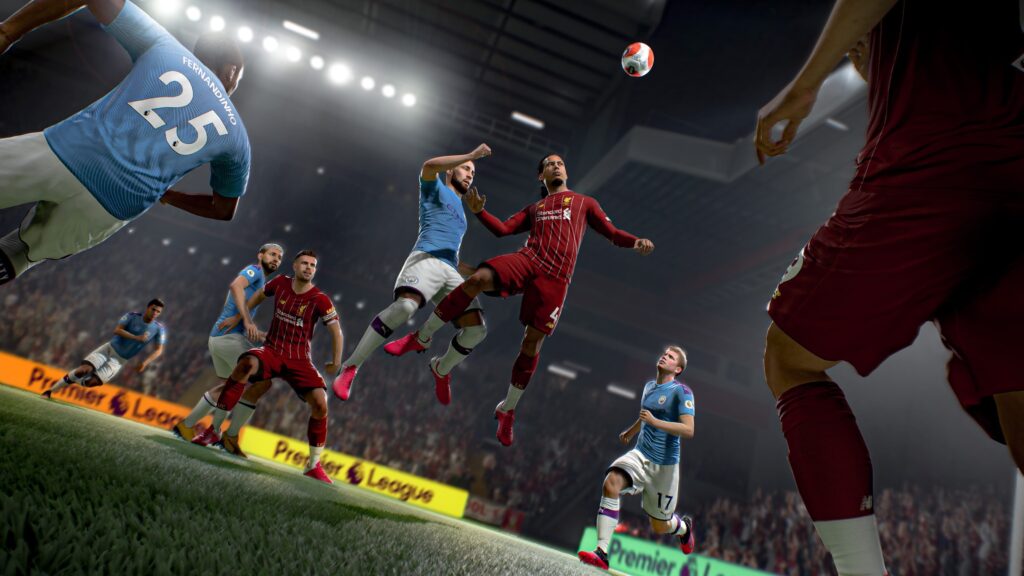 During the Conference Call with the investors, Andrew Wilson, CEO of Electronic Arts, announced that Battlefield will be revealed this June, with epic scale, all-out warfare, game changing destruction taken to next level by next-gen consoles and PCs to reach more players in the world, will be exciting also on last-gen platforms (PS4, Xbox One) with down scaled effects and resources.

The board of Electronic Arts didn't comment at the moment regarding a potential plans to annualize the franchise or a Battle Royale in BATTLEFIELD.

The title is a relaunch of the franchise and will have a new game mode to reach more players around the world. 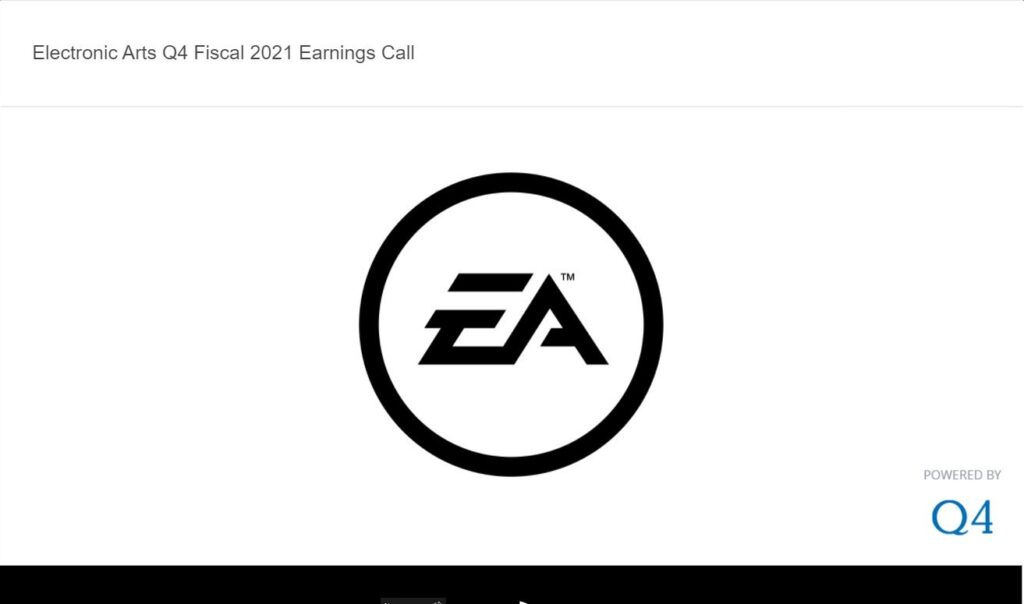 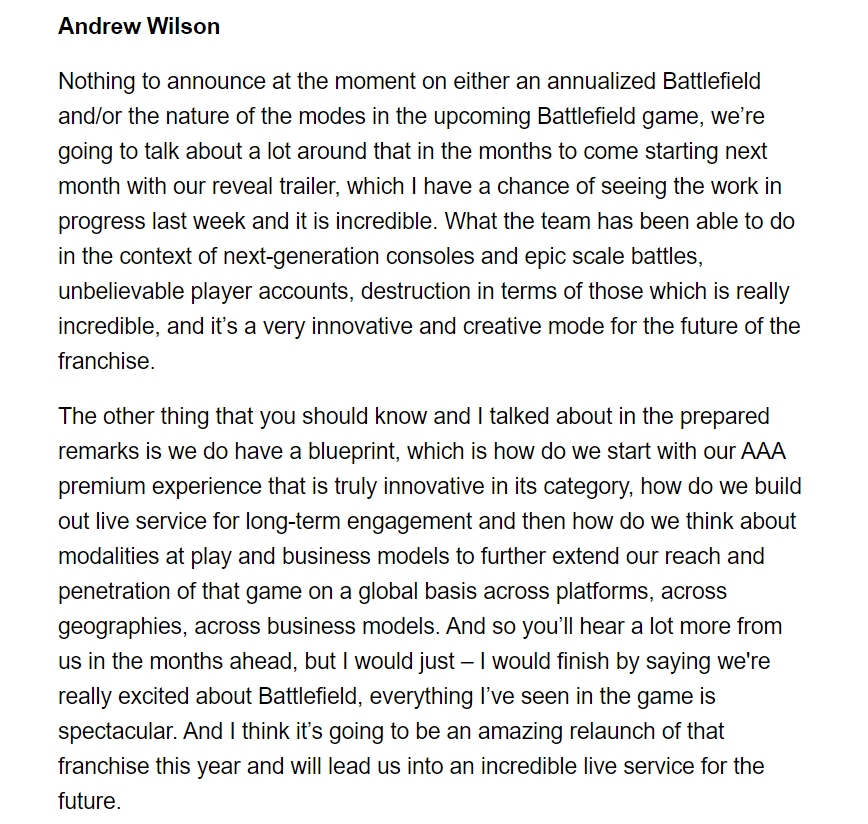 "We are positioned for continued growth in FY2022 through new launches, expansion to mobile, and preparing for the addition of new business models that will expand our total addressable audience", said Andrew Wilson. "Our strategy is to grow Battlefield as we have with our other blockbuster franchises like FIFA and Apex, best-in-class gameplay, deeply-engaging live service, a new mobile experience, and more ways to play that we will introduce to reach more players all over the world."

"we're really excited about Battlefield, everything I’ve seen in the game is spectacular. And I think it’s going to be an amazing relaunch of that franchise this year and will lead us into an incredible live service for the future", concluded Andrew Wilson.

This website uses cookies to improve your experience while you navigate through the website. Out of these cookies, the cookies that are categorized as necessary are stored on your browser as they are essential for the working of basic functionalities of the website. We also use third-party cookies that help us analyze and understand how you use this website. These cookies will be stored in your browser only with your consent. You also have the option to opt-out of these cookies. But opting out of some of these cookies may have an effect on your browsing experience.
Necessary Sempre attivato
Necessary cookies are absolutely essential for the website to function properly. This category only includes cookies that ensures basic functionalities and security features of the website. These cookies do not store any personal information.
Unnecessary
Qualsiasi cookie che potrebbe non essere particolarmente necessario per il funzionamento del sito Web e viene utilizzato specificamente per raccogliere dati personali dell\'utente tramite analisi, pubblicità, altri contenuti incorporati sono definiti come cookie non necessari. È obbligatorio ottenere il consenso dell\'utente prima di eseguire questi cookie sul tuo sito Web.
ACCETTA E SALVA